skip to main | skip to sidebar
Things [ Hand Made ]

My chance to wonder about hand made things and tell the world about those I make, love and cherish!

the year of enough 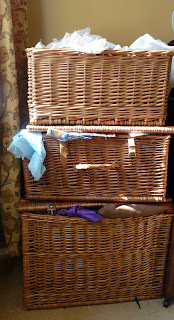 This is a new years post.
You know the sort that should be on January 1st
It is officially the first day of spring
well, the equinox was yesterday but its close enough
I declare spring to be the start of the new year

I have had a lot of teaching work with 2 new organisations and an Ofsted to deal with so I didn't see much of the year so far. Now I am coming to the end of the term it feels like a new year.

besides I have just decided on my word for the year.
I don't do resolutions but I like the idea of a word for the year.
Last years word was nurture
This year in January as I discussed it with friend there was no word that seemed right.
it has take me a while to see what the word will be
it is... and I am tempted to add a drum roll 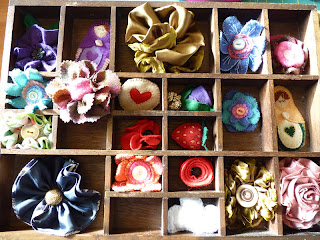 This was all reinforced in January when I sorted the study/computer/junk/craft room.
Its not a big room but I decided to pull it all out and sort it.
I looked at the amount of books I have and asked myself questions about which I would use. some books were on the shelf for sentimental reason, some were there for practical reason and I have no idea why some were there. The same went for craft materials. I started to live a much more creative life about 10 years ago. !0 years ago I needed to keep all the odds and ends of beads, thread and fabric as I did not have much. I have been stuck in that mould. Now I have enough. I do not need to keep everything
Now for some of you that will be an odd statement. You may be a person who already knows that and wonders why other people live with so much or maybe you are one for whom the statement I do not have to keep everything is heresy! 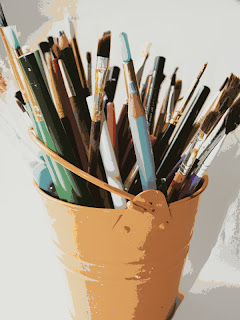 I have decided that this is the year of ENOUGH. I have enough to do all I need. I have not bought any craft materials for myself since January and I will try to last as long as possible.
The quilt top I showed in the last post... disappearing nine patch apparently (thank you)... was made from fabric I already have. All my projects this year have come out of my stash and I will try to do that for the rest of the year.
the photo at the start of the post show my fabric baskets.
and yes they are usually overflowing.
The plan is to first of all use enough that they are not overflowing and then to reduce to 2 baskets.
I have enough.
I think I will try to make it last until the Knitting and Stitching show at Alexandra Palace in the Autumn.

Now if you are still reading this self indulgent waffle its time for a give-away.
You can have some of my junk.
Something have been kept from the clear out.
leave me a comment and you will get a book or a kit or something  I have made. 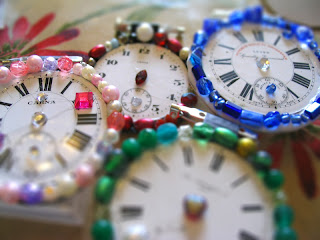 and this is not at all an attempt to clear out more junk!
its also to celebrate an approaching 40th birthday ( said very quietly at the end when no one is lsitening
and to celebrate 99 followers.

Interesting post, Jo. I feel I have more than enough and have been trying to sort it too. I've just found out that the WRE scrap store takes fabric so the piles I'd got left from making costumes when husband was a Head of Drama can go to them, and some to the charity shops so I'm just down to quilting and dressmaking stuff - now need time to make clothes and quilts!

Thank you for this.
My motto of the year is LESS. And it's sort of not working, maybe I need to change it. Or maybe I just need to sit down quietly and list what actually has worked and not be all doom and gloom ;-)

I like your idea of Enough. It's sort of like my Less really. Less fretting, less yelling, less buying, less running around like a chicken with its head cut off,... More making things myself, more calm, more using stash, more focus,...

And yes, I'd be happy to receive a gift of your Enough. And maybe in return I can pass on some of my Less ;-)

wow! I'm not a person who buys lots of fabrics - just what I need for each project. My one vice is books, although I'm only likely to buy craft books these days as I download reading books or use our wonderful library. Best of luck!! Less is More, can not remember who said that!

Hi Jo
Don't say it quietly at the end!!
Happy Birthday!! and only one more follower makes 100!
I like your word - it probably should be used more often!

Excellent!! I relate very much to your Enough and Nicole's Less. I have been on the same mission, my motto being More Space.

I so empathise with this post. I have been trying to use up "stuff" too AND been taking it over the weeks to be recycled. Funnily enough I was only discussing this with someone today and said that a lot I have kept has been because of sentimental reasons. So books have been going week by week in carrier bags to the charity shop and to be recycled. My local library has started e books which means I can download them onto my laptop..... Have a wonderful 40th....

You are so right - I too am trying harder to resist getting MORE, when I still have to use all the stuff I already have.

Wishing you a very HAPPY BIRTHDAY! Which I am shouting because it is to be celebrated :o)

The passing on of your Enough is a brilliant idea.

Though you have enough already (and right you are!): you won a 6 € voucher (see blog) cheers...

what you say really resonates with me, I am good at accumulating things, not so good at using them! I feel as if I have enough materials to last for as long as I'm likely to need them, but there are still tools I think I 'need', and I seem to use book buying as therapy. I find it very hard to say Enough. Thanks for sharing this, And happy birthday!!

I have more than enough too (a roomful of enough really) and am using it up as I'm running workshops. It is much easier than I thought to share fabric, buttons, lace and wool that I have been hoarding for years with other people who love it too. Yes of course I have a selfish box of extra special stuff but that is enough too.
Excellent post.
And HAPPY BIRTHDAY!!

It's just that every d*mn time I get neat'n'tidy and throw a bunch of stuff out...yup, THAT'S the absolute thing I need. And usually I can't find a 'right' replacement.

Just found your blog via Hannah Lamb. Lovely stuff. I know exactly what you mean and have a similar resolution for this year myself.

3 years later and your words still ring true. I am determined to stay home this weekend and clean out the sewing and hand dyeing room while the boys go to the lake to see Grandpa. Great and timely post. 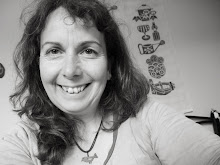 You can also find me here

Things Hand Made
My name is Joanna and I just love making things, all sorts of things!

Inspiring creative people who I wish lived just next door!

These people are especially lovely!

Members of the Embroiderers' Guild web ring
Powered By Ringsurf